The 37th Senatorial District covers much of western Allegheny County and extends into Washington County to include Peters Township. Republican Guy Reschenthaler has held the seat since he won the Special Election in 2015.

Townships and boroughs in the district 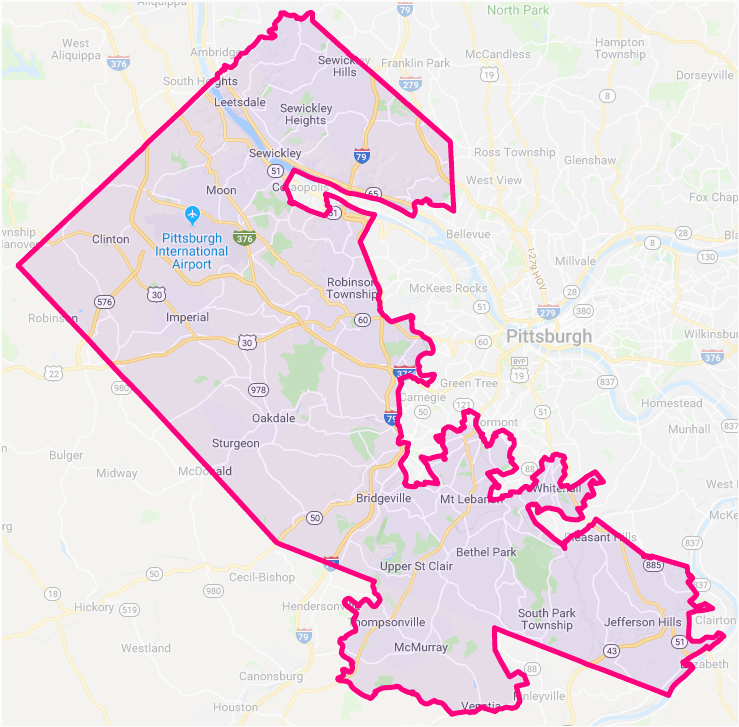 When are the polls open?

Where do I vote?

Registered voters who vote at the McLaughlin Run Activity Center (the MAC, aka old rec. center) will vote at the Municipal Building, Training Room (1820 McLaughlin Run Road, rear of building, near Library entrance) for the Nov. 6, 2018 election. The venue change is due to the ongoing renovation of the MAC. This change affects Ward 3, District 1 and Ward 3, District 3.

Who will be on my ballot?

The new Pennsylvania Congressional District Map will be in effect for the November election.

See a roundup of information about the new district maps

If you have questions or encounter election day problems, you can call the Pennsylvania Department of State hotline at 877-868-3772.

You can also seek help from the non-partisan civil rights defense Election Protection group at 877-868-3772.

How can I see the results?

You can follow the Allegheny County and Washington County Results on the county websites.

The Upper St. Clair Democratic Committee has partnered with the Bethel Park and Peters Township Committees to hold an election night celebration.

Please join us to celebrate candidates and follow the results at 8:30pm at Al’s Cafe.

The Pennsylvania Supreme Court released the Remedial United States Congressional District maps resulting from the gerrymandering suit brought by several groups, including Fair Districts PA. These maps only impact the United States House of Representative seats, and they do not influence the Pennsylvania House or Senate races. The new maps will be in effect for the 2018 Election.

Upper St. Clair is still part of the very different 18th Congressional District. The 18th includes much of downtown Pittsburgh, south east Allegheny county, and Upper St. Clair. Mt Lebanon is not part of our district, as it is now part of the 14th. Starting January 2019, our U.S. House Representative will be Mike Doyle if he wins his unopposed General Election this November. Congressman Doyle will appear on the ballot in November. If you are not familiar with Mr. Doyle, please take some time to check out his website.

After his Special Election victory, Conor Lamb will represent Upper St. Clair for the reminder of 2018. Congressman Lamb is running in the redrawn 17th District which includes his home in Mt. Lebanon.

Hi, I’m Congressman Mike Doyle and I will be running in the upcoming May Primary to represent you next year in the new 18th Congressional District.  Our new District includes communities in the South Hills, the Mon-Valley, the Eastern Suburbs and the City of Pittsburgh.

By way of introduction, I have lived in this district all of my life, I ran a small business here, and my wife and I raised our children here. I care very deeply about the Pittsburgh region and the people who live here.  In Congress, I have worked to promote policies that provide all Americans with a decent education, affordable health care, a dignified retirement, a clean environment, an improved standard of living and real opportunities for people to achieve their personal and career goals.

For the remainder of this year, you will be capably represented by Conor Lamb, who I was proud to support. I look forward to meeting and representing the people of Upper St. Clair in the next session of Congress.

In the past year, I’ve been honored to travel the Commonwealth of Pennsylvania on behalf of Fair Districts PA (https://www.fairdistrictspa.com) to discuss how legislators have “gerrymandered”– or, altered the boundaries and electoral makeup of Pennsylvania’s Congressional Districts to influence voter turnout for partisan gain – the electoral process. FDPA is a coalition of citizens and organizations who believe that in an American democracy, elections should represent the will of all the people, not just the politicians, and should provide citizens with meaningful choices in electing representatives.

In February 2018 the Pennsylvania Supreme Court ordered the Congressional map to be redrawn in response to a lawsuit filed by the League of Women Voters. In its 139-page opinion, the Court affirmed that Republican-drawn districts “clearly, plainly, and palpably” violated the state’s Constitution. Moreover, the opinion stated that the Republicans’ plan was “aimed at achieving unfair partisan gain” and “undermining voters’ ability to exercise their right to vote in free and ‘equal’ elections.”

As a result, beginning in January 2019, in southwestern Pennsylvania:

To make matters even more interesting, Pennsylvania is expected to lose a Congressional seat (down from the current 18) in the wake of the 2020 Census – and, chances are good, due to population decline and attendant variables, that SW PA will again be in the eye of the electoral storm. So, the map for Congressional Districts will, once more, need to be redrawn in time for the 2021/22 election cycles. Will Upper St. Clair voters be moved into yet another District via the reapportionment process? Get your popcorn heated and stay tuned.

Mr. Misra, with master’s degrees in Public Policy and Political Management from American University, Washington, D.C., is a professor in the Department of Social Sciences & Education at the Community College of Allegheny County and lives in the18th District. His seminars focus on voter behavior with respect to redistricting in PA. He is also the founder of Development Worx LLC, a consulting firm serving the education, government and non-profit sectors. The Upper St. Clair Democratic Committee has established eight subcommittees that carry out the functions and priorities of the Committee.

The purpose of this subcommittee is to develop partnerships with other Democratic committees, especially those in the South Hills, and other groups who share Democratic beliefs.

Manages the Committees messaging and communications, including social media, website, newsletter, and community education. The goal of the subcommittee to amplify the messages of candidates, inform the community of events and volunteer opportunities, and bring attention to the important issues.

To identify and/or create data sources to provide each member of the Committee with an analysis of their district’s voter registration information and prior election results so that they can develop strategies to maximize voter turnout in support of Democratic candidates.

Please come and celebrate the success of the Democratic Party in Upper St. Clair.  Fresh off victories for Congressman Conor Lamb and Commissioner Elise Logan, and eager to build on the momentum that those victories helped create, the annual Upper St. Clair Democratic Picnic will be held this year on Sunday, August 5 from 1 to 5 p.m. at the Old USC Recreation Center on McLaughlin Run Road (next to the township office and Little League ball field).

All USC democrats, along with their families and friends who are interested in supporting or joining the Democratic Party, are encouraged to attend the picnic and meet their neighbors who share in the democratic principles of fairness, equality, compassion and understanding, among others.

There will be plenty of good food (chicken, pulled pork, corn on the cob, baked beans, pasta salad and much more), games for kids and adults, raffle prizes and an atmosphere of camaraderie among people who respect and appreciate all that democracy has to offer.  While there is no cost to attend, donations of $5 per person or $10 per family are welcome.  Come for an hour or for the entire afternoon.  Prize baskets will be raffled off at 4:30 p.m., but winners need not be present.

DON’T BE BASHFUL.  The Upper St. Clair Democratic Committee includes residents from throughout the township, including committeemen and women who you helped elect.  The picnic is our way of saying thanks to all USC democrats and a great way for you to show your support of responsible government, not just in Upper St. Clair, but across the country.

If you would like to attend, simply respond to Mary McIntyre at marymcintyre56@gmail.com and let us know if you and your family/friends will be joining us on Sunday, August 5, 2018 at the Old Recreation Center.   We hope to see you there.